Students from Esade, IED and UPC present prototypes and solutions to improve urban mobility at CERN

Solutions for the mobility of people with disabilities, the transition to new modes of transport and inclusive urban planning, reducing the negative impacts of pollution on human health, reducing the volume of waste and facilitating the proper evacuation of communities in flood risk situations are just some of the challenges the teams of students aimed to address

Accessibility, managing the transition to new modes of transport and inclusive urban planning, pollution and the allocation of urban space are the four urban mobility challenges posed this year for the sixth edition of Challenge Based Innovation (CBI), an initiative driven by IdeaSquare and the Department of Innovation at CERN – the European Organization for Nuclear Research. The initiative aims to foster multidisciplinary teams of students to work on new solutions for the future of humanity, with the collaboration of teachers and research staff from various institutions.

Eight teams of students, made up of 37 students from Esade Business School, IED Barcelona and UPC (Polytechnic University of Catalonia) from 12 different countries, have presented their prototypes, following months of work during which they exchanged knowledge with scientists from CERN. The proposals have been developed since September at Fusion Point, a collaborative space shared by the three institutions at the Rambla of Innovation, at Esade in Sant Cugat del Vallès.

The four challenges presented this year around the theme of urban mobility have been jointly defined with EIT Urban Mobility and are based on one of the 17 United Nations Sustainable Development Goals, detailed in the 2030 Agenda: Goal 11, focusing on sustainable cities and communities. Each of the challenges was addressed by two teams of students.

Accessibility for people with disabilities

In the accessibility challenge, teams have worked on solutions to improve the mobility of people with disabilities, in particular people with blindness, conceived for the "last mile", which is the journey between the home and the point of access to public transport.

The Navier team has developed an intelligent guide based on the identification of routes and obstacles. It is a solution with a futuristic vision in which a mini drone is used to fly above the user, connecting to a system that identifies various types of obstacles and informs them, through voice messages, which type they are, how far away they are and whether they move towards the user. The system uses the technologies of image recognition, Lidar and Doppler Radar.

The Ralph Braun team has taken a complementary approach, with an instrumented cane that also detects the presence of obstacles, using ultrasound and Lidar technology, but they have placed the emphasis on the way the information is provided to the user, through wearable actuators.

The challenge of managing the transition to new modes of transport and inclusive urban planning has seen a focus on defining the roles of municipalities and public space in urban mobility, taking into account citizens and long-term planning and regulations.

The Mileva team has developed a tool that complements methods of public transport planning. Unlike existing tools that are based only on mobility static data, theirs detects the movements of the population from point A to B in suburban areas in an anonymous and non-invasive way, using various methods, among them the detection of mobile phones.

The Turing team has proposed a solution to manage the regulation of traffic with a view to the introduction of autonomous vehicles and other new modes of urban transport. To this end, they have designed a system that, using augmented reality, projects traffic regulation indications, which are adopted dynamically in the street, onto the vehicle's windscreen or its GPS.

Reducing the impact of pollution on human health

The challenge of pollution has focused on seeking solutions to ensure the maintenance and increase the quality of natural resources, in order to reduce negative impacts on human health and improve overall quality of life.

In this sense, the Fermi team has created a guide system for rental bicycles, which proposes alternative routes depending on the pollution found in the city, using pollution data models developed by the Barcelona Supercomputing Center (BSC).

The Alani team proposes a prototype of an absorption system for suspended particulates (SPM) based on the use of vertical moss device combined with robotic planters, also equipped with moss panels, which move independently towards the side of the street experiencing higher levels of pollution. This system regulates traffic by blocking streets near to schools during peak times and includes various sensors to monitor the state of the moss and the proximity of obstacles.

Finally, in the challenge related to the allocation of urban space, how to to design urban space and return it to citizens in order to improve livability were considered.

The Heisenberg team, which has worked more on the aspect of resilient cities, has created a system that facilitates the proper evacuation of communities in flood risk situations. This project combines different types of warnings, such as augmented reality images, which serve to visualize and alert the user to the risk situation in which they may find themselves in a few hours time.

The CBI project offers students the opportunity to use technology from CERN, a leading advocate of the development of new technologies, and to gain knowledge about a range of areas of expertise first-hand from the organization's scientists. 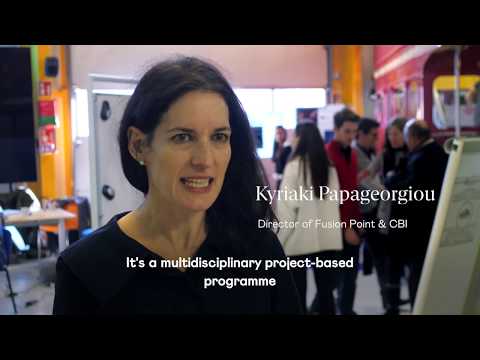 Pilar López Álvarez, president of Microsoft Spain: “The threat to cyber security is greater than ever”